My Taiwan Travel blog continues! I was expecting the weather to go bad on July 10th, but the typhoon arrived late and the rain only started around 20:00. I'm pretty happy because that means I got to enjoy another beautiful day of hiking in Taroko National Park.

I couldn't find time on the 10th to sit down and blog about my trip, so this blog will also include what I did on the 11th.

The first path I did on the 10th was Xiaozhuilu to warm my muscles a little bit. It links the Shakadang Trail to the Taroko Visitor center and it's both easy and enjoyable. The path is mainly composed of stairs and man-made walkways, but it's the middle of the forest and goes by the LiWu river.

To me, the highlight of the trail was the short rope suspension bridge. How cute!

Once I finished the Xiaozhuilu trail, I decided I was ready for something a little more challenging. Since the park was slowly closing down because of the incoming Typhoon Maria, the only paths I could do were the ones where I didn't need to ride a bus.

Although the path is very steep and goes through the wild forest/jungle, this path is also mainly man-made walkways and stairs. Here is a forest interpretation poster I really liked:

The leaves of a tree are its name cards. The name cards of the Macaranga tree are very special. They are large and round and the petiole is not on the leaf margin, it is inside the leaf blade. They are called perforated leaves and look like shields. [...] The Macaranga tree is like a spearhead. When the village here relocated and the fields were abandoned, it quickly moved in. The numerous leaves form a large umbrella that catches a large amount of sunlight and allows it to grow quickly. It can be predicted that in the future, the Macaranga will gradually be replaced by trees that are more shade tolerant. In the meantime however, its leaves, flowers and fruits are a source of food loved by the insects and birds.

A very fengshui tree yo.

Here is a bonus video of one of the giant spiders I was describing yesterday being eaten by ants. For size comparison, the half step you can see is about 10cm large...

The Dekalun Trail ends quite abruptly and diverges into two other paths: one that goes back down and the other one that climbs to the Dali village and then continues to the Datong village. 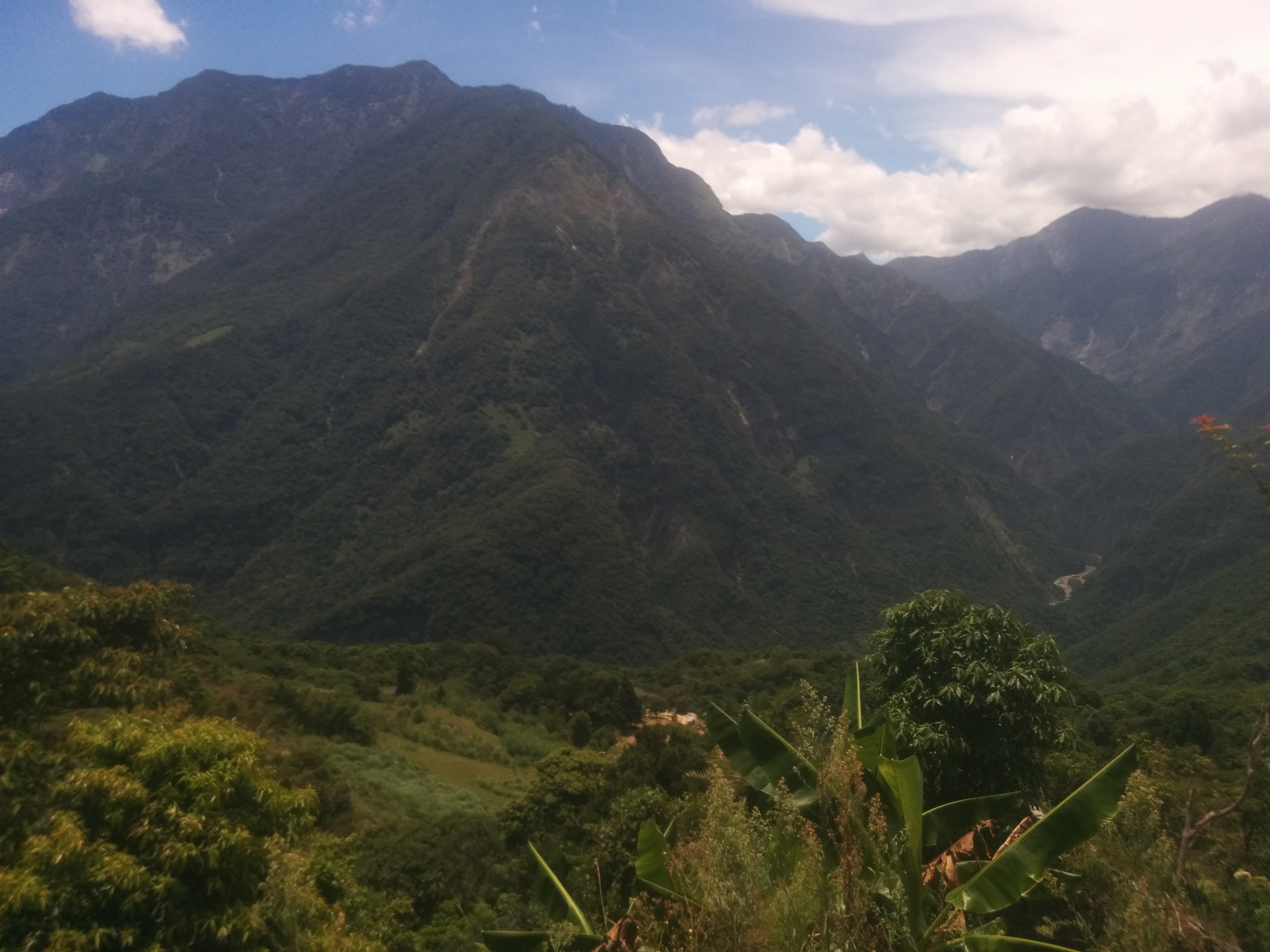 It was still early in the afternoon when I arrived at the crossroad so I decided that I was at least going to make it to Dali before turning back. Turns out that was a good idea, since the Dali path was a really beautiful mountainside path with a very challenging heigh difference. If the Dekalun Trail is a light 3/5, I'd say the Dali trail is a heavy 3/5. Although I'm in shape, I had to stop multiple times to sit down and try to cool myself. By itself the trail would be fine, but it's the 35+°C with a high level of humidity that made it challenging to me.

Once I arrived at Dali, I needed a permit to continue to Datong but the path was very easy, the weather beautiful and the view incredible, so I couldn't stop myself. I think I walked about half of the 6km trail from Dali to Datong before running out of water. Turns out 4L wasn't enough. The mixed guilt of not having a mountain permit and the concern I wouldn't have anything left to drink for a while made me turn back and start climbing down.

Still, no regrets! This trail was clearly the best one I did so far.

So there I was in my bed after a day of hiking in the mountains, ready to go to sleep when Andrew Lee reached out to me.

He decided to come by my hostel to talk about the DebConf18 daytrip options. Turns out I'll be the one to lead the River Tracing daytrip on the MeiHua river (梅花溪). River tracing is a mix of bouldering and hiking, but in a river bed.

I'm a little apprehensive of taking the lead of the daytrip since I don't know if my mandarin will be good enough to fully understand the bus driver and the activity guide, but I'll try my best!

Anyway, once we finished talking about the daytrip, Andrew proposed we go to the Hualien night market. After telling him I wasn't able to rent a bike because of the incoming typhoon (nobody would rent me one), we swerved by Carrefour (a large super market chain) and ended up buying a bicycle! The clerk was super nice and even gave me a lock to go with it.

I'm now the proud owner of a brand new Giant bicycle for the rest of my trip in Taiwan. I'm retrospective, I think this was a pretty good idea. It'll end up cheaper than renting one for a large amount of time and will be pretty useful to get around during DebConf.1 It's a little small for me, but I will try to buy a longer seat post in Hualien.

After buying the bike, I guess we said fuck the night market and met up with one of Andrew's friend who is a musician and owns a small recording studio. We played music with him for a while and sang songs, and then went back to Andrew's place to eat some flying fish that Andrew had smoked. We drank a little and I decided to sleep there because it was getting pretty late.

Andrew was a wonderful guest and brought me back to my hostel the next day in the afternoon after showing me the Hualien beach and drinking some tea in a local teashop with me. I had a very good time.

What an eventful two days that was! Turns out the big typhoon that was supposed to hit on the 11th turned out to be a fluke and passed to the north of Taiwan: in Hualien we only had a little bit of rain. So much for the rainpocalyspe I was expecting!

Short but heartfelt language rant: Jesus Christ on a paddle-board, communication in a language you don't really master is exhausting. I recently understood one of the sentences I was trying to decipher was a pun and I laughed. Then cried a little.