I built my last desktop computer what seems like ages ago. In 2011, I was in a very different place, both financially and as a person. At the time, I was earning minimum wage at my school's café to pay rent. Since the café was owned by the school cooperative, I had an employee discount on computer parts. This gave me a chance to build my first computer from spare parts at a reasonable price.

After 10 years of service1, the time has come to upgrade. Although this machine was still more than capable for day to day tasks like browsing the web or playing casual video games, it started to show its limits when time came to do more serious work.

I first started considering an upgrade in September 2020: David Bremner was kindly fixing a bug in ledger that kept me from balancing my books and since it seemed like a class of bug that would've been easily caught by an autopkgtest, I decided to add one.

After adding the necessary snippets to run the upstream testsuite (an easy task I've done multiple times now), I ran sbuild and ... my computer froze and crashed. Somehow, what I thought was a simple Python package was maxing all the cores on my CPU and using all of the 8GB of memory I had available.2

A few month later, I worked on jruby and the builds took 20 to 30 minutes — long enough to completely disrupt my flow. The same thing happened when I wanted to work on lintian: the testsuite would take more than 15 minutes to run, making quick iterations impossible.

Sadly, the pandemic completely wrecked the computer hardware market and prices here in Canada have only recently started to go down again. As a result, I had to wait more time than I would've liked not to pay scalper prices.

The difference between the two machines is pretty staggering: I've gone from a CPU with 2 cores and 8 threads, to one with 12 cores and 24 threads. Not only that, but single-threaded performance has also vastly increased in those 10 years.

A good example would be building grammalecte, a package I've recently sponsored. I feel it's a good benchmark, since the build relies on single-threaded performance for the normal Python operations, while being threaded when it compiles the dictionaries.

On the old computer:

And as you can see, on the new computer the build time has been significantly reduced:

Same goes for things like the lintian testsuite. Since it's a very multi-threaded workload, it now takes less than 2 minutes to run; a 750% improvement.

All this to say I'm happy with my purchase. And — lo and behold — I can now build ledger without a hitch, even though it maxes my 24 threads and uses 28GB of RAM. Who would've thought... 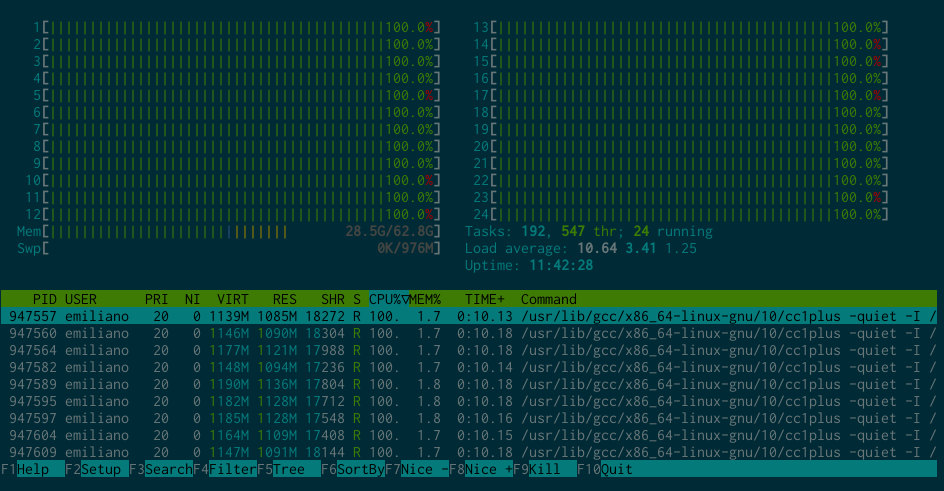