I've been teaching economics for a few semesters already and, slowly but surely, I'm starting to get the hang of it. Having to deal with teaching remotely hasn't been easy though and I'm really hoping the winter semester will be in-person again.

Although I worked way too much last semester1, I somehow managed to transition to using a graphics tablet. I bought a Wacom Intuos S tablet (model CTL-4100) in late August 2021 and overall, I have been very happy with it. Wacom Canada offers a small discount for teachers and I ended up paying 115 CAD (~90 USD) for the tablet, an overall very reasonable price.

Unsurprisingly, the Wacom support on Linux is very good and my tablet worked out of the box. The only real problem I had was by default, the tablet sometimes boots up in Android mode, making it unusable. This is easily solved by pressing down on the pad's first and last buttons for a few seconds, until the LED turns white.

The included stylus came with hard plastic nibs, but I find them too slippery. I eventually purchased hard felt nibs, which increase the friction and makes for a more paper-like experience. They are a little less durable, but I wrote quite a fair bit and still haven't gone through a single one yet.

Learning how to use a graphical tablet took me at least a few weeks! When writing on a sheet of paper, the eyes see what the hand writes directly. This is not the case when using a graphical tablet: you are writing on a surface and see the result on your screen, a completely different surface. This dissociation takes a bit of practise to master, but after going through more than 300 pages of notes, it now feels perfectly normal.

Here is a side-by-side comparison of my very average hand-writing2: 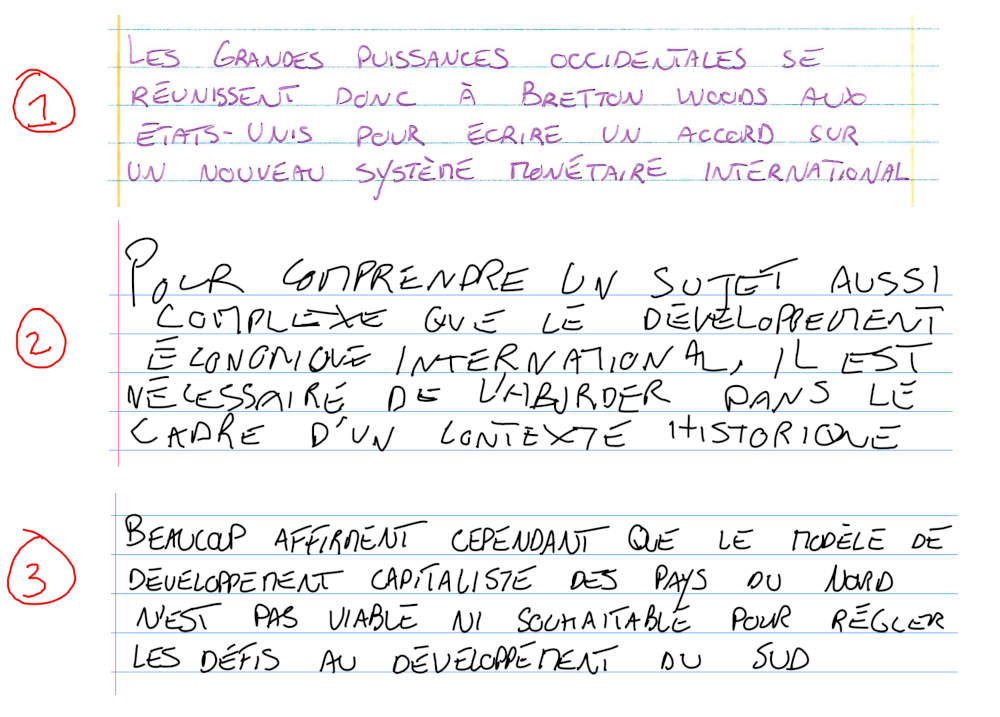 I still prefer the result of writing on paper, but I think this is mostly due to me not using the pressure sensitivity feature. The support in xournal wasn't great, but now that I've tried it in xournalpp (more on this below), I think I will be enabling it in the future. The result on paper is also more consistent, but I trust my skills will improve over time.

The first use case I have for the tablet is grading papers. I've been asking my students to submit their papers via Moodle for a few semesters already, but until now, I was grading them using PDF comments. The experience wasn't great3 and was rather slow compared to grading physical copies.

I'm also a somewhat old-school teacher: I refuse to teach using slides. Death by PowerPoint is real. I write on the blackboard a lot4 and I find it much easier to prepare my notes by hand than by typing them, as the end result is closer to what I actually end up writing down on the board.

Writing notes by hand on sheets of paper is a chore too, especially when you revisit the same material regularly. Being able to handwrite digital notes gives me a lot more flexibility and it's been great.

So far, I have been using xournal to write notes and grade papers, and although it is OK, it has a bunch of quirks I dislike. I was waiting for xournalpp to be packaged in Debian, and it now is5! I'm looking forward to using it next semester.

Towards a better computer monitor

I have also been feeling the age of my current computer monitor. I am currently using an old 32" 1080p TV from LG and up until now, I had been able to deal with the drawbacks. The colors are pretty bad and 1080p for such a large display isn't great, but I got used to it.

What I really noticed when I started using my graphics tablet was the input lag. It's bad enough that there's a clear jello effect when writing and it eventually gives me a headache. It's so bad I usually prefer to work on my laptop, which has a nicer but noticeably smaller panel.

I'm currently looking to replace this aging TV6 by something more modern. I have been waiting out since I would like to buy something that will last me another 10 years if possible. Sadly, 32" high refresh rate 4K monitors aren't exactly there yet and I haven't found anything matching my criteria. I would probably also need a new GPU, something that is not easy to come by these days.