For the love of goddamn pickles

I've always loved pickled food. I think if I had to rank my most favorite pickle, I would have a hard time choosing between pickled cucumbers and pickled eggs. Hmmm, eggs.

Anyway, I started pickling food for real around two years ago. I did some pickled cucumbers in vinegar once before that but nothing serious. My first true pickling experience was making homemade sauerkraut from nothing but cabbages and salt.

I said true pickling because I've grown to consider putting things in vinegar as cheater's pickles. Don't get me wrong here: some of them taste great (beets in sugary vinegar for example), but it's nothing compared to the fun and the incredible feeling of accomplishment you get from fermenting raw vegetables with only salt (and sometimes water).

If you never heard of lacto-fermentation before, you could basically describe it as such: the yeasts & bacteria naturally present on the skin of your vegetables develop in an environment where there is no air and no other competing bacteria. When it does, it breaks down you food (making it taste great) and acidifies the solution it's in, killing all other bacteria.

To make sure your yummy veggies do not rot before they ferment, we put them in salted water. This inhibits the development of other bacteria, but not of the ones responsible for lacto-fermentation.

Fermentation is an anaerobic process, meaning you want to keep your fermenting vegetables away from air. If you don't, they'll rot instead of fermenting.

The challenge of fermenting thus lays in the techniques used to do that. Most of the time, you'll want to use a big pot and weight your pickles with something for them to stay under the brine.

I first stated fermenting using a big lidless clay pot my great-grandmother used to use to pickle cucumbers. Apart from making me feel I was connecting with my family history, it did not work so well. To be honest, it worked fine, but was a hassle to use. 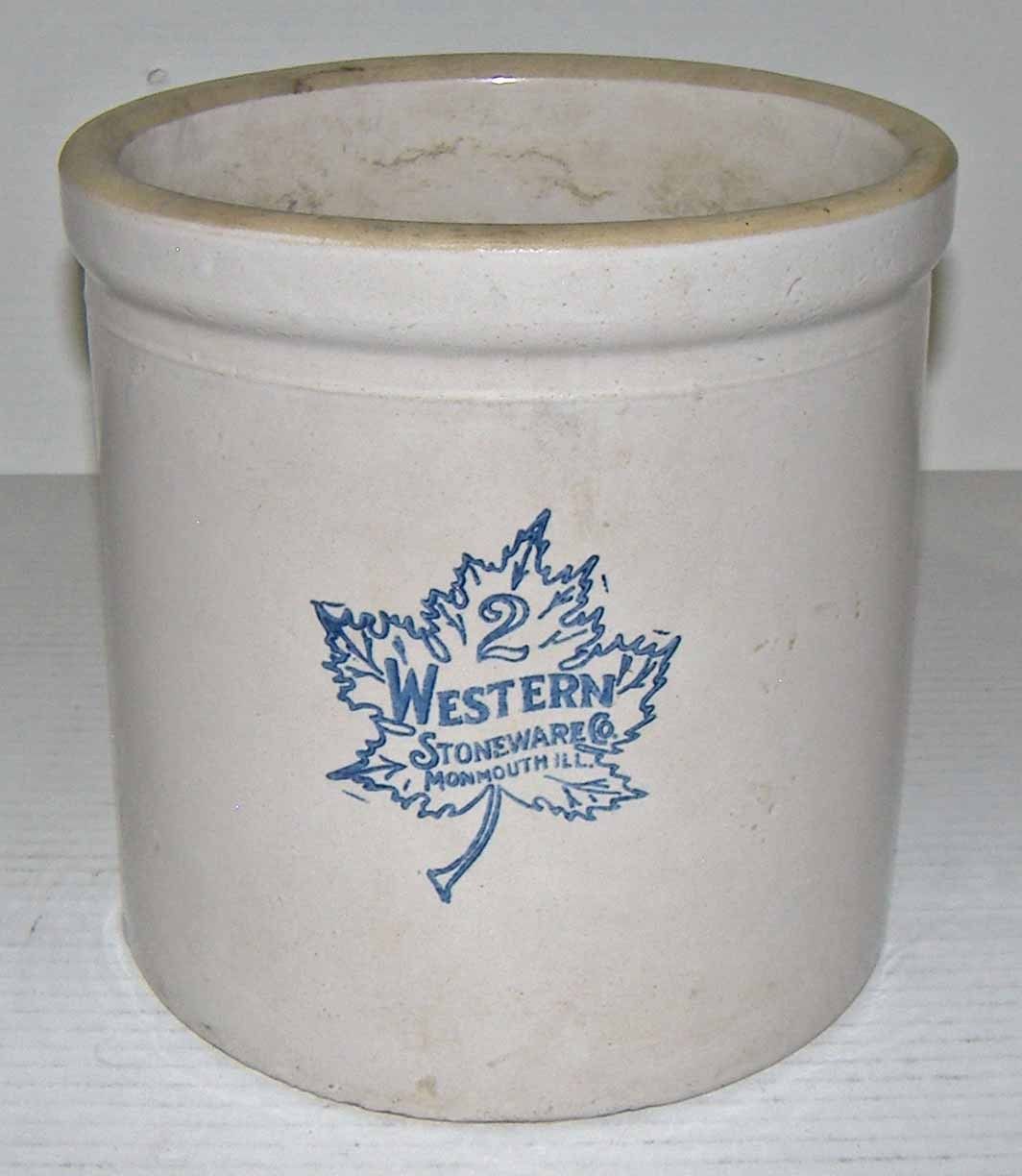 First of all, the pot was not really round but somewhat oval as it was handmade, making the use of a regular plate as a weight impossible. I ended up using glass marbles tied in a cheesecloth. Marbles kept exploding when I sterilized them and cheesecloths are somewhat expensive, making this an overall pain in the butt.

On top of this, since this was a lidless pot (by design), I had to skim the brine each 2 or 3 days to make sure nothing was growing on top of the brine. I feel you great-grandma.

I still made sauerkraut and my first cucumber pickle batch in this pot. It now lives under my sink, awaiting to be used again. Who knows, maybe my great-grandkids will use it someday.

Who never joked about German engineers being so great? Well, turns out it's not something new.

Germans seem to love pickles at least as much as I do and have been pickling for a while now. I guess one day someone grew tired of using a lidless pot like the one I have and designed this wonderful piece of craftsmanship. 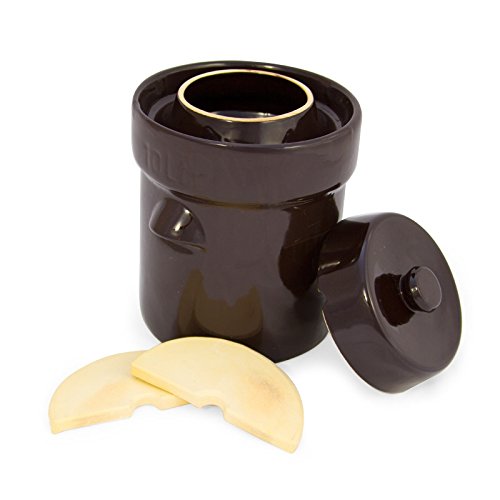 It might not obvious if you never used such a pot, but the lid of the pot has a deep groove in it. You fill this groove with water, thus creating an airlock. As your food ferments, the gasses created replace the air inside of the pot, creating the perfect anaerobic environment. Excess gasses bubble through the water.

This means you can leave your pot closed for a whole month and never have to worry about spoilage. The only thing you have to check from time to time is the water level in the groove. On top of this, my pot came with two beautiful clay weights. No more marbles!

The only downside of such a pot is that it's a little expansive. Then again, if you treat it correctly, your pot should last you a lifetime.

My pot is a whooping 10 liters one. This is great for fermenting a lot of stuff at once, but as I learned from my last batch of sauerkraut, you have to make sure it's completely filled. If not, there is too much empty space inside and the food starts to rot.

I'll try to keep this blog post updated with the recipes I've tried and give some general feedback on them. This is mostly intended for future me, but if you happen to read this and try one of them, tell me about it!

This is the first recipe I did and it has been by far the most successful one. If you ever want to start fermenting food, I'd recommend you start with sauerkraut.

To make sauerkraut, you only have to shred cabbage in very thin slices (some people use mandolines to do this, I prefer a nice sharp chef knife) and add salt to it.

The salt will draw the water out of the cabbage, making the brine in which it will ferment. This process takes some time (20 minutes?) and you have to work the cabbage with your hand, pressing it and squeezing it as much as you can. The final goal is to have enough brine to cover your weights with at least 3 cm of brine. You might need to add some salted water to you pot if you don't have enough brine.

How much salt should you use? The golden number is 3 tablespoons for 5 pounds or cabbage, or in non-retard units, 19 mL of salt for 1 kg of cabbage. You can use slightly less salt than that if you prefer, but beware: using less salt increases the chances of your cabbage rotting instead of fermenting.

Wait a month and you now have delicious sauerkraut.

I had around 10 kg of carrots lying around after an event and nobody wanted them. I turned them in delicious fermented carrots!

My mom suggested I put some ginger into it, so I did. I think I added between 200 and 400 grams of ginger to the mix. Some (like my special other) though it was too much, but others loved it. Personally I think the flavour was nicer after being canned for a while.

Using again 19 mL of salt per kilogram of shredded carrots, I did not have to add any water to get a good brine level. Looks like carrots contain more water than cabbages!

Making so much fermented food is not much more job and makes great Christmas gifts :D

A classic. Fermented pickles taste nothing like their vinegary friends.

The first batch I made was glorious, but sadly I lost the recipe. The second batch I made was way to salty and I had to desalinate them in water overnight and dilute the brine before canning them, thus making them less good.

5 tablespoons of salt per liter is too much. Next time I'll try with 2,5 tbsp per liter and see what the result is.

Fermented beets are hard to describe if you never tasted them. Maybe you ate some of those Lebanese fermented turnips before? Well they taste somewhat like that and have the same soft but yet crunchy texture.

Using 3 tablespoons of salt per liter was again too much. Like a previous batch of pickles, I had to desalinate them and cut the brine by a third. Next time I think I can manage with 2 tbsp of salt per liter, but still I worry about spoilage.

Note: beets are high in sugar and some of that sugar is turned in alcohol during the fermentation process. This changes the taste a little. Some people don't like it (I do) and mix beets and turnips to bring down the overall sugar level.

A little alcohol also means you can use less salt safely!