I brewed two new batches of beer last March and I've been so busy since I haven't had time to share how much of a failure it was.

See, after three years I thought I was getting better at brewing beer and the whole process of mashing, boiling, fermenting and bottling was supposed to be all figured out by now.

Turns out I was both greedy and unlucky and - woe is me! - one of my carboy exploded. Imagine 15 liters (out of a 19L batch) spilling out in my bedroom at 1AM with such force that the sound of the rubber bung shattering on the ceiling woke me up in panic. I legitimately thought someone had been shot in my bedroom. 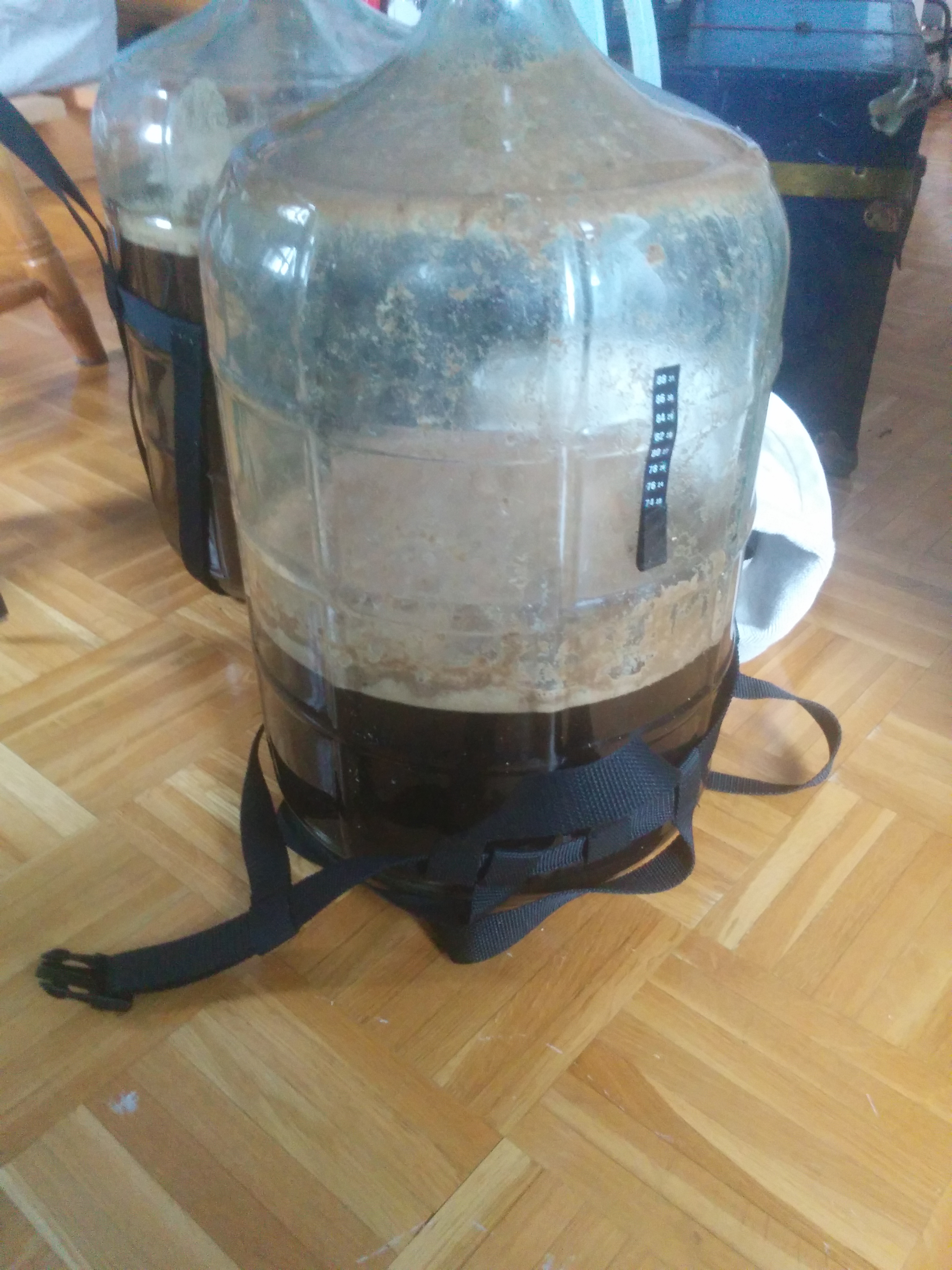 The aftermath left the walls, the ceiling and the wooden floor covered in thick semi-sweet brown liquid.

This was the first time I tried a "new" brewing technique called parti-gyle. When doing a parti-gyle, you reuse the same grains twice to make two different batches of beer: typically, the first batch is strong, whereas the second one is pretty low in alcohol. Parti-gyle used to be way beer was brewed a few hundred years ago. The Belgian monks made their Tripels with the first mash, the Dubbels with the second mash, and the final mash was brewed with funky yeasts to make lighter beers like Saisons.

The reason for my carboy exploding was twofold. First of all, I was greedy and filled the carboy too much for the high-gravity porter I was brewing. When your wort is very sweet, the yeast tends to degas a whole lot more and needs more head space not to spill over. At this point, any homebrewer with experience will revolt and say something like "Why didn't you use a blow-off tube you dummy!". A blow-off tube is a tube that comes out the airlock into a large tub of water and helps contain the effects of violent primary fermentation. With a blow-off tube, instead of having beer spill out everywhere (or worse, having your airlock completely explode), the mess is contained to the water vessel the tube is in.

The thing is, I did use a blow-off tube. Previous experience taught me how useful they can be. No, the real reason my carboy exploded was my airlock clogged up and let pressure build up until the bung gave way. The particular model of airlock I used was a three piece airlock with a little cross at the end of the plastic tube1. Turns out that little cross accumulated yeast and when that yeast dried up, it created a solid plug. Easy to say my airlocks don't have these little crosses anymore...

On a more positive note, it was also the first time I dry-hopped with full cones instead of pellets. I had some leftover cones in the freezer from my summer harvest and decided to use them. The result was great as the cones make for less trub than pellets when dry-hopping.

What was left of the porter came out great. Here's the recipe if you want to try to replicate it. The second mash was also surprisingly good and turned out to be a very drinkable brown beer. 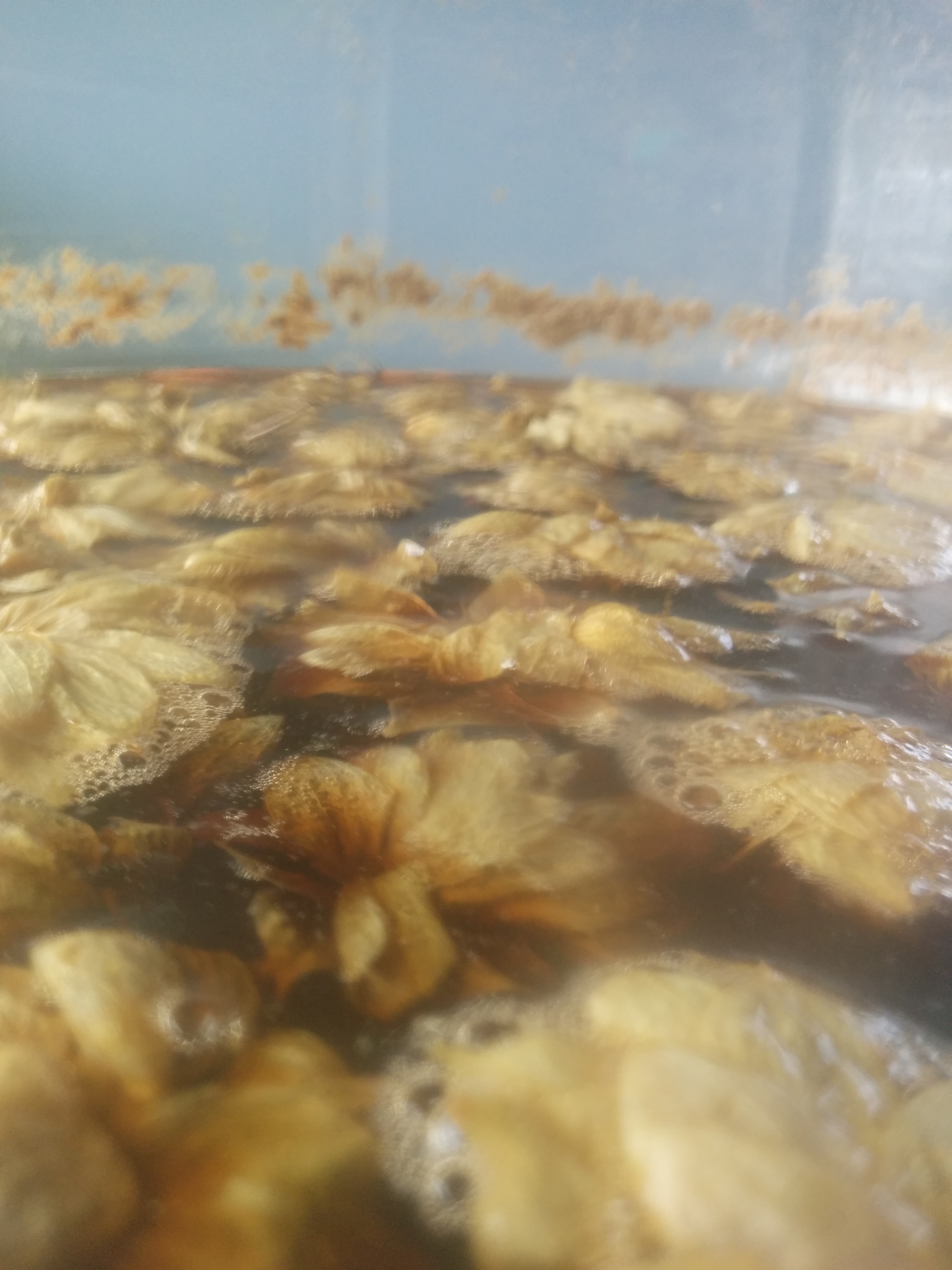 Since this is a parti-gyle, do not sparge. If you don't reach the desired boil size in the kettle, top it off with water until you reach 23L.

Black Malt gives very nice toasty aromas to this porter, whereas the Oat Flakes and the unmalted Black Barley make for a nice black and foamy head.

The target boil volume is 26L and the target batch size 18L. Mash at 65°C for over an hour, sparge slowly and ferment at 19°C.

The result is a very nice table beer.

same as for the Party Porter, since we are doing a parti-gyle.