DebConf20 starts in about 5 weeks, and as always, the DebConf Videoteam is working hard to make sure it'll be a success. As such, we held a sprint from July 9th to 13th to work on our new infrastructure.

A remote sprint certainly ain't as fun as an in-person one, but we nonetheless managed to enjoy ourselves. Many thanks to those who participated, namely:

We also wish to extend our thanks to Thomas Goirand and Infomaniak for providing us with virtual machines to experiment on and host the video infrastructure for DebConf20.

For DebConf20, we strongly encourage presenters to record their talks in advance and send us the resulting video. We understand this is more work, but we think it'll make for a more agreeable conference for everyone. Video conferencing is still pretty wonky and there is nothing worse than a talk ruined by a flaky internet connection or hardware failures.

As such, if you are giving a talk at DebConf this year, we are asking you to read and follow our guide on how to record your presentation.

Fear not: we are not getting rid of the Q&A period at the end of talks. Attendees will ask their questions — either on IRC or on a collaborative pad — and the Talkmeister will relay them to the speaker once the pre-recorded video has finished playing.

Organising a virtual DebConf implies migrating from our battle-tested on-premise workflow to a completely new remote one.

One of the major changes this means for us is the addition of Jitsi Meet to our infrastructure. We normally have 3 different video sources in a room: two cameras and a slides grabber. With the new online workflow, directors will be able to play pre-recorded videos as a source, will get a feed from a Jitsi room and will see the audience questions as a third source.

This might seem simple at first, but is in fact a very major change to our workflow and required a lot of work to implement.

In our tests, playing back pre-recorded videos to voctomix worked well, but was sometimes unreliable due to inconsistent encoding settings. Presenters will thus upload their pre-recorded talks to SReview so we can make sure there aren't any obvious errors. Videos will then be re-encoded to ensure a consistent encoding and to normalise audio levels.

This process will also let us stitch the Q&As at the end of the pre-recorded videos more easily prior to publication.

One of the pitfalls of the streaming infrastructure we have been using since 2016 is high video latency. In a worst case scenario, remote attendees could get up to 45 seconds of latency, making participation in events like BoFs arduous.

In preparation for DebConf20, we added a new way to stream our talks: RTMP. Attendees will thus have the option of using either an HLS stream with higher latency or an RTMP stream with lower latency.

Here is a comparative table that can help you decide between the two protocols:

Live mixing from home with VoctoWeb

Since DebConf16, we have been using voctomix, a live video mixer developed by the CCC VOC. voctomix is conveniently divided in two: voctocore is the backend server while voctogui is a GTK+ UI frontend directors can use to live-mix.

Although voctogui can connect to a remote server, it was primarily designed to run either on the same machine as voctocore or on the same LAN. Trying to use voctogui from a machine at home to connect to a voctocore running in a datacenter proved unreliable, especially for high-latency and low bandwidth connections.

Inspired by the setup FOSDEM uses, we instead decided to go with a web frontend for voctocore. We initially used FOSDEM's code as a proof of concept, but quickly reimplemented it in Python, a language we are more familiar with as a team.

Compared to the FOSDEM PHP implementation, voctoweb implements A / B source selection (akin to voctogui) as well as audio control, two very useful features. In the following screen captures, you can see the old PHP UI on the left and the new shiny Python one on the right. 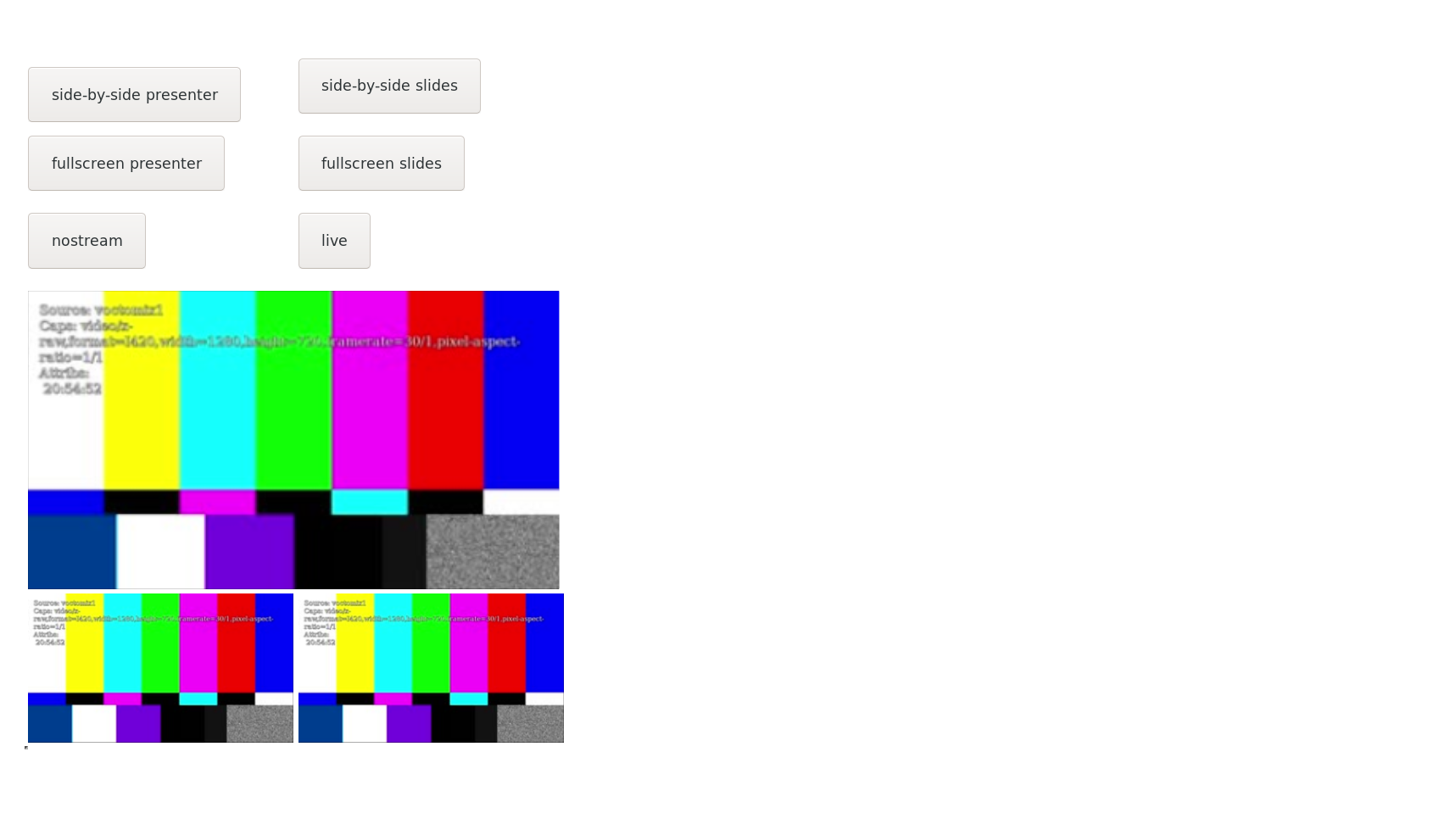 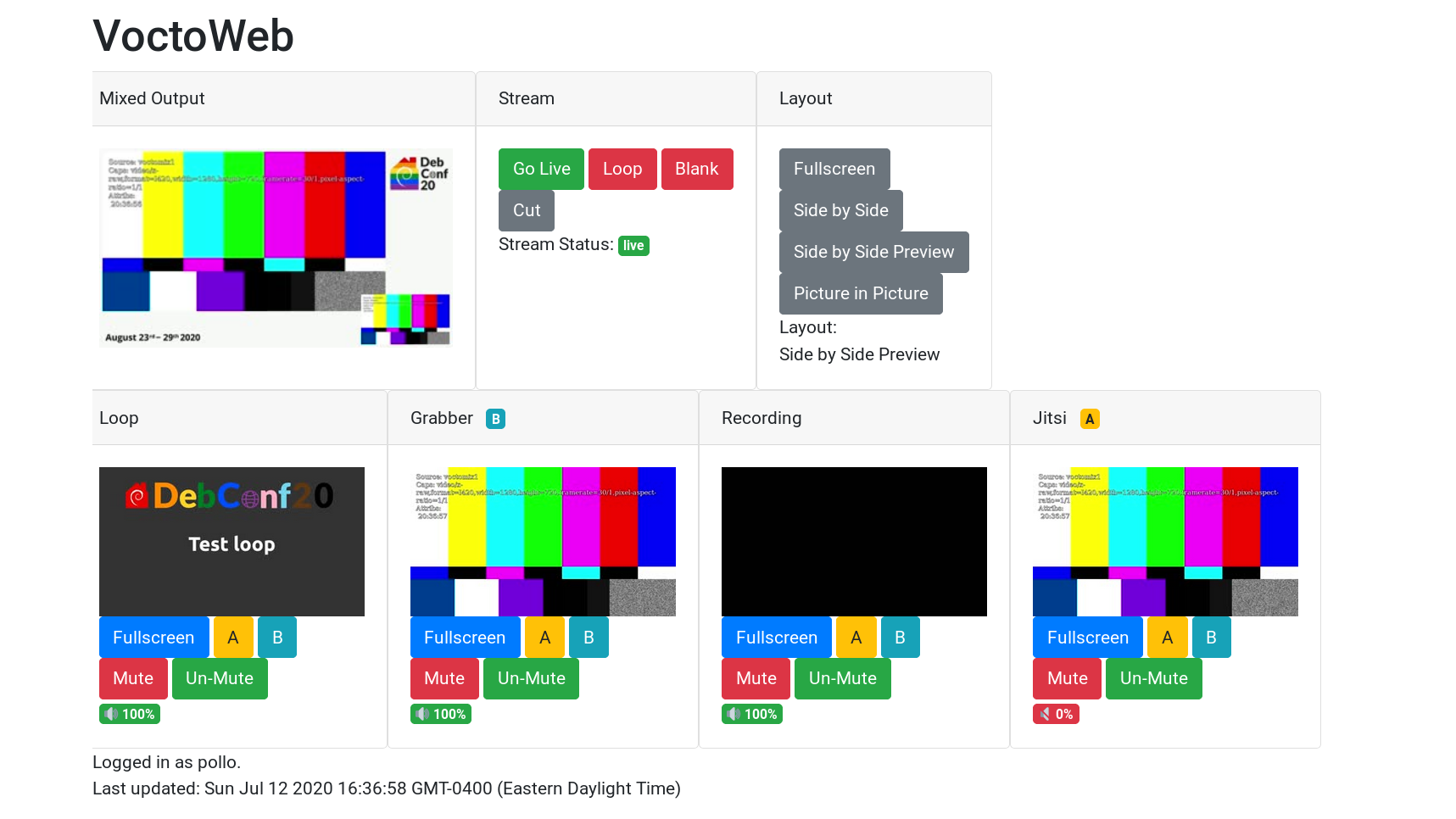 Voctoweb is still under development and is likely to change quite a bit until DebConf20. Still, the current version seems to works well enough to be used in production if you ever need to.

We run multiple geographically-distributed streaming frontend servers to minimize the load on our streaming backend and to reduce overall latency. Although users can connect to the frontends directly, we typically point them to live.debconf.org and redirect connections to the nearest server.

Sadly, 6 months ago MaxMind decided to change the licence on their GeoLite2 database and left us scrambling. To fix this annoying issue, Stefano Rivera wrote a Python program that uses the new database and reworked our ansible frontend server role. Since the new database cannot be redistributed freely, you'll have to get a (free) license key from MaxMind if you to use this role.

Infrastructure as code is a living process and needs constant care to fix bugs, follow changes in DSL and to implement new features. All that to say a large part of the sprint was spent making our ansible roles and continuous integration setup more reliable, less buggy and more featureful.

All in all, we merged 26 separate ansible-related merge request during the sprint! As always, if you are good with ansible and wish to help, we accept merge requests on our ansible repository :)